This is the first monument to be erected in Nova Scotia
to honour those who served their country in World War One.

Located at the New Ross Legion building, on the north side
of the Forties Road, about 200m west from Highway 12 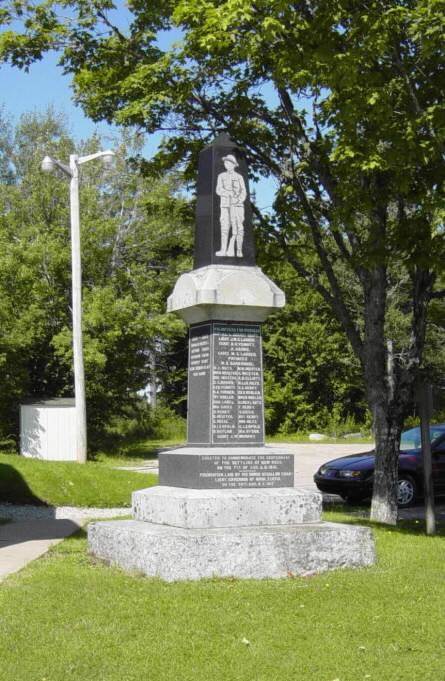 At the regular meeting of the New Ross Historical Society in January2006,
the speaker for the evening, RonBarkhouse, Historian, gave a talk on
the history of the New Ross monument, which included these facts:
• The monument is the first monument to be erected in Nova
Scotia to honour those who served their country in WorldWarOne.
• The monument was erected to honour ex-soldiers who settled NewRoss (thenSherbrooke) as well as those who served in WorldWarOne.
• The base stone was placed at the village crossroads on 28August1917.
• The finished or polished stones and crown were placed on the
base in the fall of1918.
• In 1959, the Monument/Cenotaph was moved from its original site to its
present location on the grounds of the New Ross Canadian Legion,
Branch#79.
• What was considered phase2 of the project, that is, the
likeness of a soldier on a stone column, was placed atop the monument in the1990s.

The New Ross war memorial monument at its original location, before 1959

Photograph thanks to Gerald Keddy