In memory of members of
the Norwegian Merchant Navy,
Royal Norwegian Navy,
and Royal Norwegian Army,
who were lost at sea or were buried
in Nova Scotia during the
Second World War 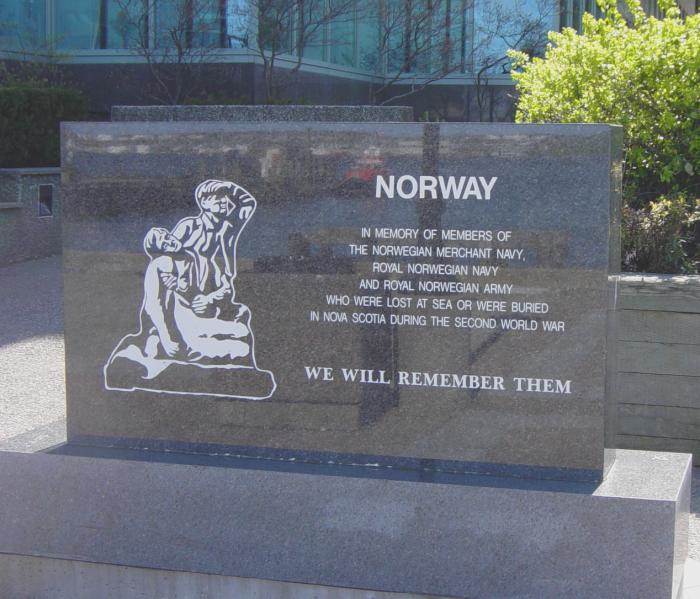 The Norwegian memorial stone at Sackville Landing in Halifax commemorates members of
the Norwegian Merchant Navy, the Royal Norwegian Navy and Army buried in Nova Scotia.
It also commemorates those who sailed out of Nova Scotian ports never to return.
It was donated by Hans Petter Strandberg, of Strandberg Stein a.s., Larvik, Norway, and
brought to Halifax through the courtesy of Wilhelmsen Line. The Government of Norway paid
for the installation. The design on the face of the stone is copied from a monument in Larvik
and was used with the permission of the late artist’s family.
The monument was unveiled on Canada’s Remembrance Day, 11November 1998,
by His Excellency Johan L. Løvald, then Norwegian Ambassador to Canada, and
Mr. Jostein Kjelsrud of Larvik.
— Source:

Norwegians in Nova Scotia during the Second World War
by the Norwegian Embassy, Ottawa
http://www.emb-norway.ca/Embassy-and-Consulates/norwaycanada/
Historical-ties/campnorway/norwegians/


Norwegian war graves in Nova Scotia by the Norwegian Embassy, Ottawa
There are 35 graves of Norwegian sailors, soldiers and merchant seamen in Nova Scotia.
One grave is in Sydney, four in Lunenburg and the rest are in Halifax.
St. John’s Anglican Cemetery, Fairview, is the last resting place of ten merchant seamen
whose remains occupy what is known as the Norwegian Plot while one other grave lies
not far away. There are seventeen Norwegian war graves in Camp Hill Cemetery.
These are scattered over a wide area and some of them were unmarked until quite recently…
http://www.emb-norway.ca/Embassy-and-Consulates/norwaycanada/
Historical-ties/campnorway/wargraves/

Norwegians in Nova Scotia during the Second World War
by the Norwegian Embassy, Ottawa
In 1940 Norway, with a population of some 3,000,000, had the
third largest ocean going merchant fleet in the world, about 1100 ships.
When Nazi Germany invaded the country without warning on the 9th of April
that year, 1024 of those ships were at sea. The King immediately ordered
them all to proceed to allied ports. At the same time, the German-backed
government that had been set up in Oslo under Vidkun Quisling, was
broadcasting orders for the ships to return home. Not a single one did so
and Norway’s great merchant fleet was now at the disposal of the Allies.
This is where Nova Scotia comes in to the picture…
http://www.emb-norway.ca/Embassy-and-Consulates/
norwaycanada/Historical-ties/campnorway/norwegians/

Nova Scotia Tour: Day 8 Chester to Mount Denson
…One really interesting small monument caught my attention.
When Hitler invaded Norway in 1940, a group of Norwegian fisherman
fled to Canada. These men set up a camp near Chester…
http://www.tomswenson.com/NSday8.htm