His main business interest was the manufacture of grindstones.
In 1847 over 33,000 grindstones were shipped from Cumberland County. 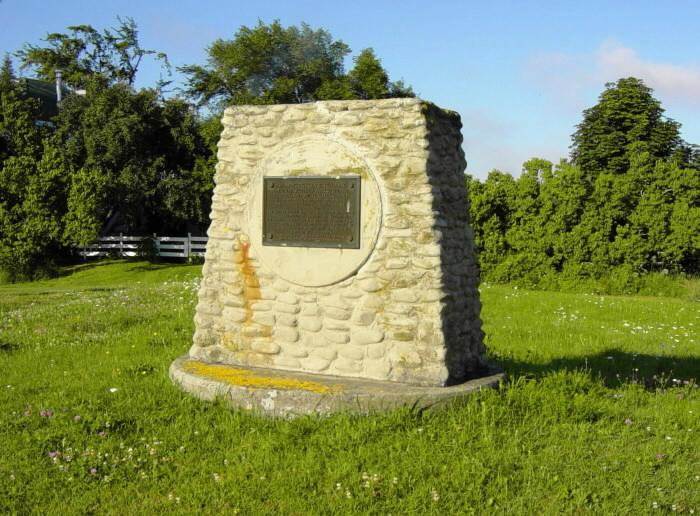 “Steam mill” means a sawmill powered by a steam engine.
In the 1800s, there were many sawmills in Nova Scotia,
most (all, before Amos Seaman’s mill) powered by water.
As late as the 1940s, most sawmills were water-powered.

Digitally enhanced (below) to make the inscription more legible 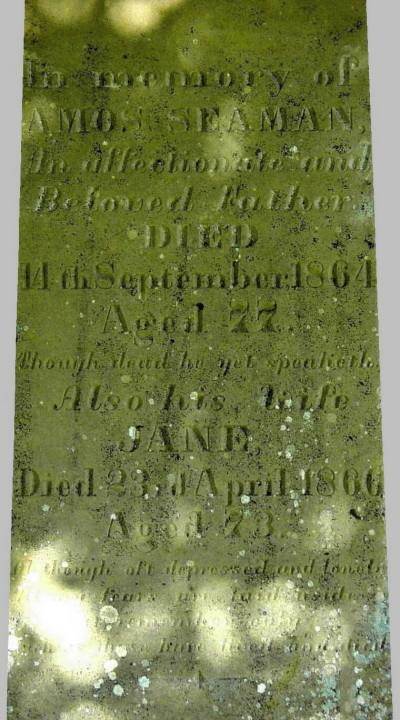 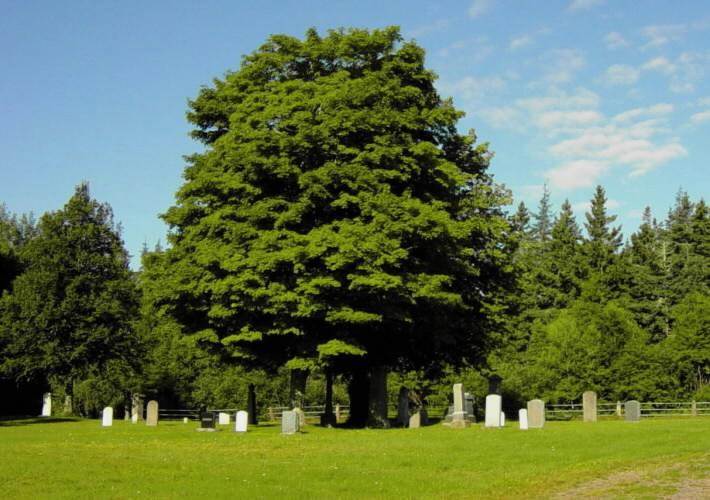 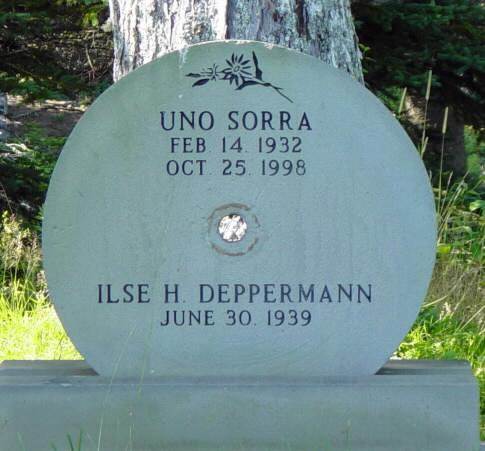 This tombstone, made from a grindstone, shows the hole bored through each stone
to accomodate an axle. When mounted on its axle, a grindstone could be turned
– usually at a rotational speed of about 40 to 80 revolutions per minute –
to do the grinding work required.

This grindstone has a ring of rust around the central hole,
showing that at one time it was mounted on an axle. 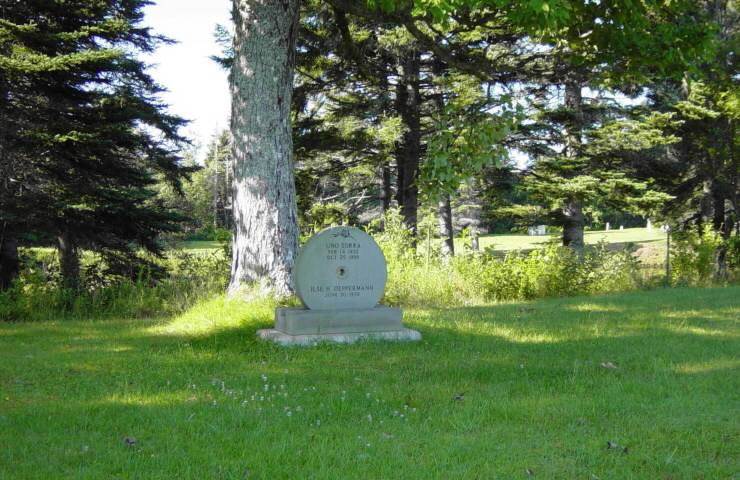 Grindstone tombstone at Minudie Lake Cemetery. In the background, on the right,
can be seen some of the tombstones clustered around the Amos Seaman tombstone. 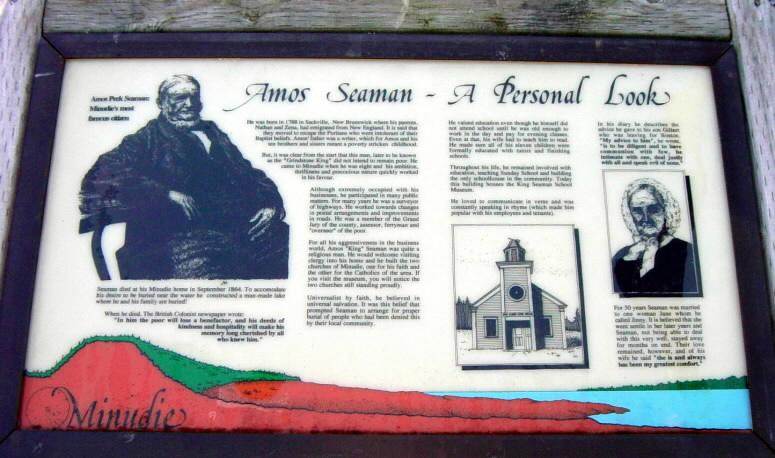 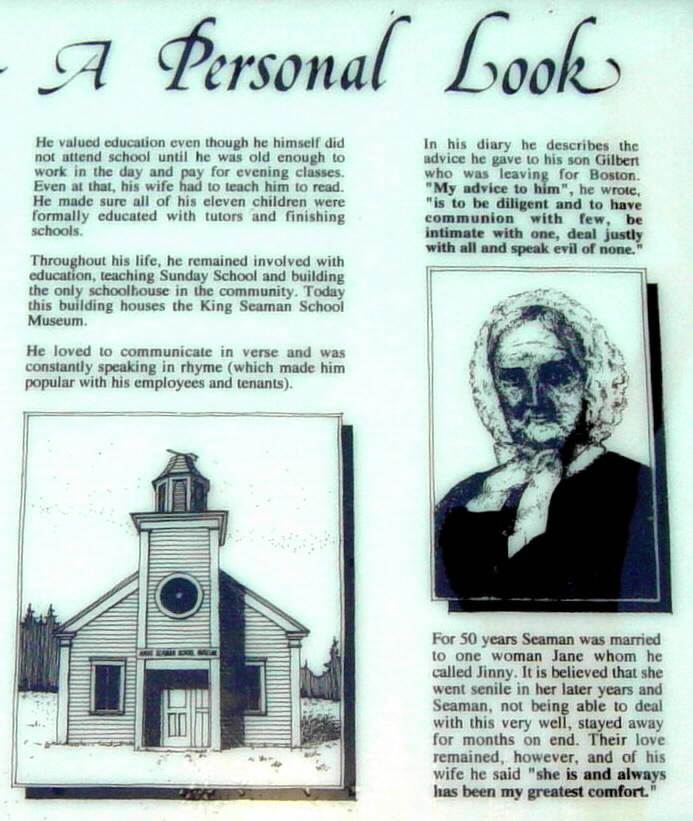 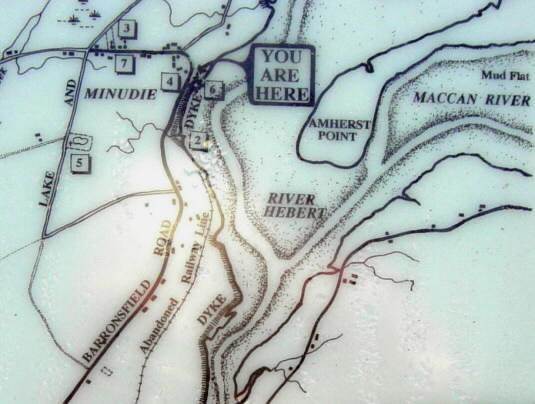 “You are here” marks the location
of these interpretative panels

The above panel photographs were taken on 30 July 2003.


The Minudie Millionaire by Bill Hamilton
Sackville Tribune-Post, 12 September 2000
…Amos Seaman’s independent spirit was matched only by his ambition and
entrepreneurial drive. In hiking about Minudie he noticed sandstone deposits
in the ledges along the coastline. Others before him had quarried such stone
for local use, but it was Seaman who saw the potential for a new industry.
By 1810, in partnership with his brother Job, he began selling grindstones
in Boston. From this point onward Amos Seaman never looked back…


King Seaman School Museum
by the Cumberland County Genealogical Society
…In the early 1840s Amos Seaman built a school for his children and those
of his tenants. Amos was a zealot where education was concerned, having
lacked formal schooling himself. After their marriage his wife Jane taught
him to read and write. All their sons were sent to college and their
daughters to American finishing schools…


Minudie Interpretive Park by Fundy Shore Ecotour
…The sedimentary sandstone lay in layers on the basin bottom, and had been
cracked by natural processes into squares of even depth. It was extracted by
rowing a barge into the basin at high tide, waiting for the tide to go down,
hooking ropes onto the squares, and allowing the tide to raise
both the barge and the sandstone…


Lower Cove: Former Site of Booming Grindstone Quarry
…Grindstones were fashioned in a variety of weights and sizes. In 1875,
a stone produced in Lower Cove, Cumberland County, and shipped to Maine
was seven feet [213 cm] in diameter and weighed 8,000 pounds [3500 kg]…


An Infant Railway: What the Iron Horse will do for the Joggins
Halifax Morning Herald, 3 November 1887
The opening of the Joggins Railway…
…there is the Minudie Branch of six miles…


The History of Joggins
by CREDA: Cumberland Regional Economic Development Association
…The quarrying of grindstones from the great sandstone reefs along
the shore was a much valued industry for the Joggins area. The
largest company to work this resource was the Atlantic Grindstone
Coal & Railway Company at the Lower Cove. These quarries were
operated by Amos “King” Seaman and later by his son Gilbert
who at that time was one of the most powerful and wealthiest men
in Nova Scotia…


Joggins
by CREDA: Cumberland Regional Economic Development Association
…Learn about Minudie’s history at the interpretive park or the
Amos Seaman Schoolhouse Museum, and catch glimpses of wildlife
through the trees. The schoolhouse museum describes the history
of the granite quarry and recounts the of life of Minudie’s most
celebrated citizen, Amos Seaman, the “Grindstone King”…


St. Denis Church, Barronsfield Road, Minudie
Provincial Heritage Property Owners Assocation of Nova Scotia
By 1968 the population of Minudie had dwindled to such a degree
that the Church doors of St. Denis closed for regular mass. In 1975
a committee was struck to restore the building. In 1993, St. Denis
Church was designated a Heritage Property, and the Restoration Committee
of St. Denis started preserving this grand old church. Today (2002)
the Blessing of the Crops Mass is still celebrated every year, on the
third Sunday in August. There is a bake and harvest sale followed
by an afternoon Blessing of the Crops Mass….


Amos Seaman House, Minudie
Provincial Heritage Property Owners Assocation of Nova Scotia
Amos built his mansion in 1837. The Homestead, also known
as Grindstone Castle, comprised of four huge rooms downstairs and
five bedrooms upstairs, as well as quarters for six servants. The
house was always filled with guests from all corners of the world,
including Sir Charles Tupper and Joseph Howe…

In the mid-1980’s, Mr. Herbert C. Read dismantled the Grindstone Museum
which he had put together in the “Carriage House” of the Marshlands Inn
in Sackville, New Brunswick, (the old family home – a Heritage Property) and
donated all its contents to the town of Sackville. In January, 1999, these
articles were passed on to the Tantramar Heritage Trust, including about
200 beautiful grindstones which likely originated from the Stonehaven quarry…
Source:
The White Fence the Tantramar Heritage Trust newsletter, March 1999
http://heritage.tantramar.com/WFNewsletter_8.html

In 1847 over 33,000 grindstones were shipped from Cumberland County…
Source:
Secondary Processing of Industrial Minerals in Nova Scotia
http://www.gov.ns.ca/natr/meb/data/pubs/ic/ic53.pdf

On 10 May 1864, Major-General Hastings Doyle, Lieutenant-Governor of
Nova Scotia, gave Royal Assent to an Act for the Incorporation of the
South Joggins Freestone and Grindstone Quarrying Company
(owned by Amos Seaman).
Source: page 168 of Journal of Proceedings of Her Majesty’s Legislative Council
of the province of Nova Scotia, 1864
CIHM 9_00947_38