Location: On the south side of Upper Road (Highway 348)
adjacent to the Presbyterian Church

Each year on the first Sunday in May, Canada’s naval community
commemorates those lost at sea during the Second World War.

Admiral Murray was born in Granton, Pictou County, Nova Scotia, and educated at Pictou Academy. He joined the first class of the Royal Naval College of Canada in Halifax in1910 at the age of14. The navy promoted him to lieutenant commander in1927 and to commander and senior naval officer, Esquimalt, in1929. In1938 he became Canadian director of naval operations and was soon promoted to commodore. From1940 to 1941 he commanded HMCS Assiniboine as commodore of the Halifax force. In1943 he became Commander-in-Chief North-West Atlantic, responsible for shipping and escorts among North Atlantic ports in Newfoundland, New York, Boston and Iceland. He held that post until after the war, when he moved to England and became a lawyer specializing in admiralty law. He died in1971.
Source: — The Bosun’s Call, November 2006
Nova Scotia Naval Officers’ Association Newsletter 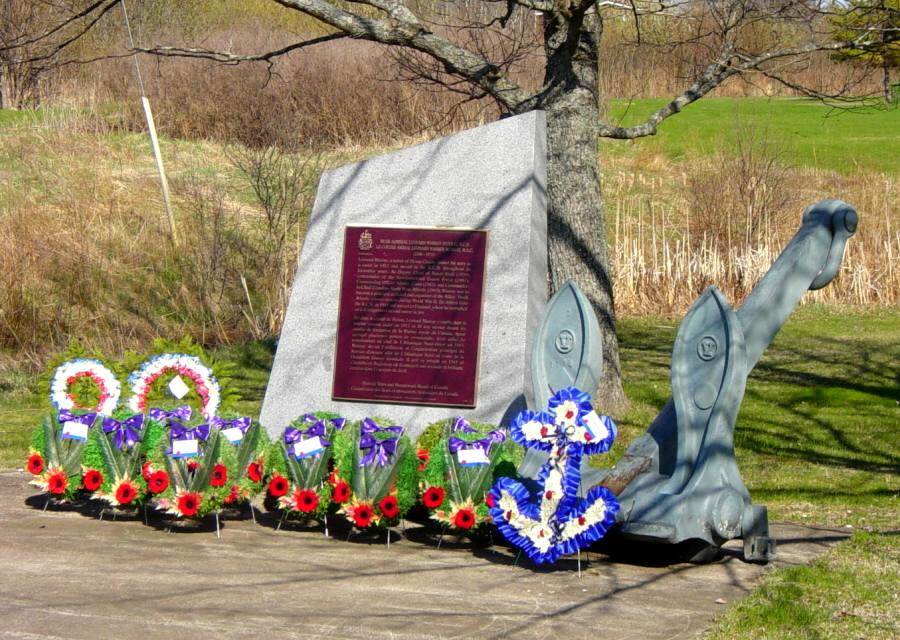 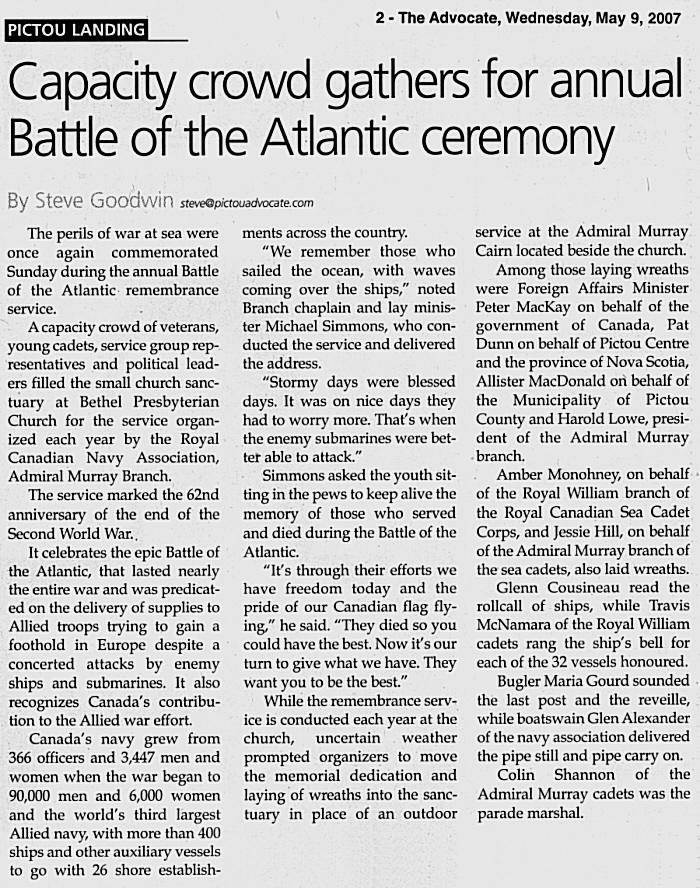 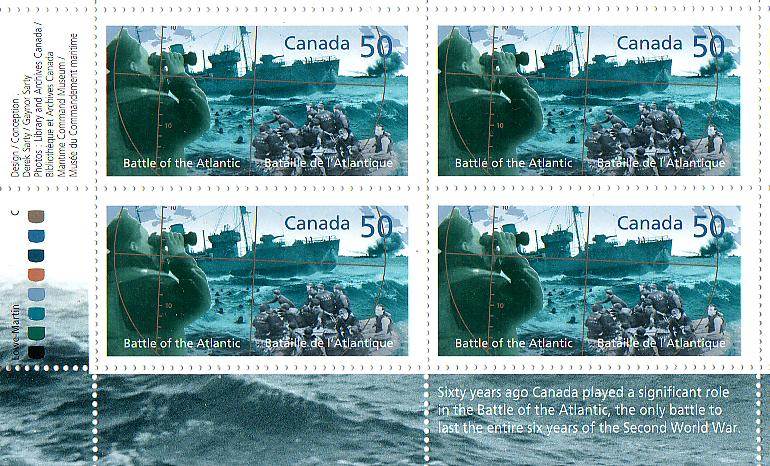 50¢ stamp commemorating the 60th anniversary of the end of the Battle of the Atlantic,
officially unveiled 1 May 2005 at the Maritime Museum of the Atlantic, Halifax.
2 500 000 of these stamps were printed.

The Battle of the Atlantic

The Battle of the Atlantic which lasted 2,075days, was the longest campaign of the Second WorldWar. Itpitted Allied navies against German and Italian naval forces, especially submarines, in a battle to safeguard the essential flow of shipping between North America and Europe.
On any given day 125 merchant vessels were sailing in convoy across the North Atlantic. It was during these treacherous, stormy crossings that Canada’s navy matured and won the mantle of a professional service. Our navy escorted 25,343merchant vessels across the Atlantic. These ships carried 181,643,180tons of cargo to Europe – the equivalent of eleven lines of railway freight cars, each stretching from Vancouver to Halifax. Without these supplies, the war effort would have collapsed.
Although it was largely unprepared for war in 1939, Canada’s navy grew at an unparalleled rate, eventually providing 47percent of all convoy escorts. Rear Admiral Leonard Murray, Commander-in-Chief North-West Atlantic, who directed convoy battles from Halifax would become the only Canadian to hold an Allied theatre command during the war…
— From the Battle of Atlantic Memorial Service pamphlet
Online source:
The Battle of the Atlantic
http://www.thewrens.com/boatantic_hist.html

Spikenard and her connection with the Crows Nest

…After completing three convoy runs to Iceland, Spikenard was transferred to the Newfoundland Escort Force. Anew system developed by the RN and RCN was to see Canadian vessels escort slow convoys (designated by the SC prefix) from Sydney, Nova Scotia to a mid-ocean point where the escort duties would be turned over to the RN with a final destination of Londonderry, Northern Ireland.

With the fleet based out of St John’s, Newfoundland, the first of these Newfie-Derry convoys, SC-67, comprising 22merchantmen, departed Sydney on February2, 1942 picking up their escort out of St.John’s late in the day. With the 22merchantmen arranged in a rectangle of seven columns three or four ships deep, the escorts were arranged with Spikenard (Senior ship; COLCdr Shadforth) well ahead of the starboard column, with Louisbourg approximately 2000yards astern. Three miles back, Dauphin kept station well behind the convoy to the starboard side while the same arrangement was mirrored down the port side with Chilliwack in the lead position followed by Lethbridge and finally Shediac trailing astern of the convoy with Dauphin.

This, February 10, was the last night of their escort duties and the convoy was to be turned over to an RN escort the following morning. At around 10:30p.m. on that dark, windy, moonless night however, fate would deal a lethal blow as three explosions in rapid succession lit up the sky. The convoy had sailed into two German U-boats, which had been lying in wait: U-591 and U-136.

Immediately it was ascertained that the Norwegian tanker Heina in the extreme starboard column was hit and though the second and third explosions could not be pinpointed, all escorts made hard turns to head up the torpedo tracks in an attempt to track the U-boats on their asdic. Unbeknownst to the crews of the other five escorts, Spikenard had been hit between her bridge and fo’c’sle; so severe was the damage that she sank within fiveminutes.

Not wanting to give away their positions, none of the ships risked a wireless signal, which would allow one of the U-boats to zero in on the sender’s position. It was not until the early light of the morning of February11 that the escort group realized Spikenard was no longer with them. This, in itself caused no immediate concern as it quite possible she had raced ahead to contact the waiting RNescort to assist in hunting the U-boats. Unfortunately, when the convoy reached their waiting RNescort, Spikenard was nowhere to be seen.

The RN corvette HMS Gentian was detached to race down the convoy’s track and late in the afternoon of February11, her lookouts sighted a carley float with just eight survivors clinging to life. (Originally, the liferaft held ten people but two succumbed to the cold and injuries and were committed to the sea.) These eight were landed when the ship reached Liverpool, England. In all, 57of Spikenard’s crew were lost including her Captain, LCdr Hubert C Shadforth…

— From Trident v41 i5
Trident is the newspaper of Maritime Forces Atlantic
Online source:
Spikenard and her connection with the Crows Nest
http://www.tridentnews.ca/InHistory.asp

In order to encourage the captains of the merchant ships of
all countries which carried the lifeblood of the United Kingdom,
I made it a point to attend the briefing conference of all captains
and chief engineers before their departure. During the winter of
’42-’43, when sinkings were at their worst, I could see when
I told them of the measures by escort and air cover that were
being taken for their protection and safety; I could see that
they knew very well and that they knew I knew in spite of
my brave words, that anything up to 25 per cent of them would
probably not arrive in the U.K. in their own ships, and that
probably half of that number would not arrive in the U.K. at all.
But there was never a waver in their resolve.
— Admiral Leonard Murray, RCN


The Royal Canadian Navy and the Battle of the Atlantic, 1939-1945
by the Canadian War Museum
http://www.warmuseum.ca/cwm/disp/dis007_e.html


The Battle of the Atlantic
Canadian Newspapers in the Second World War
by the Canadian War Museum
http://www.warmuseum.ca/cwm/newspapers/operations/atlantic_e.html