French Cross monument, looking west over the Bay of Fundy

French Cross monument, looking northeast over the Bay of Fundy 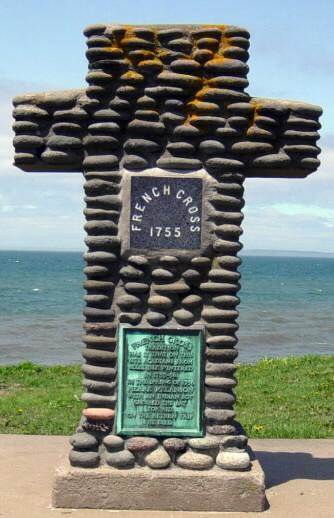 The above photographs were taken on 2 June 2003.

The French Cross at Morden
http://members.tripod.com/~norma_doucette/NovaScotia9index-2.html

The “French Cross” at Morden, N.S.
by Father Clarence d’Entremont, Yarmouth Vanguard, 21 November 1989
…Before leaving Morden, they erected over the tombs of those who were
not able to make it, a large black cross, that withstood the elements of
nature till about 1860, thus over one hundred years. After a number of
years, the people of Morden, who had seen the wooden cross, decided
to erect another one, to keep alive the tradition of this episode of the
Expulsion of the Acadians. This was in 1887 when an oak cross was
erected, as close as possible to the location where the first cross stood,
which location has been eroded by the sea. It was replaced in 1920 by
a third cross, this time made of rounded beach stones. As people who
were coming to see the cross were increasing in number, it was decided
twenty five years ago, that is in 1964, to build here a park and to erect
a more artistic cross, the one that Idescribed above. Its unveiling
took place the 29th of August of that year…
http://web.archive.org/web/20010228045517/
http://www.ccfne.ns.ca/~museum/english/archives/articles/47.htm