Located near the Town Hall 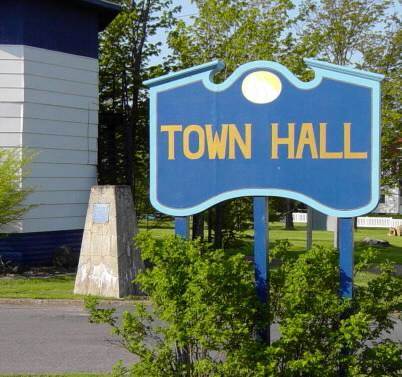 The date, July 7, 1919, on this metal plaque is wrong.
The Handey-Page aircraft was forced to land in Parrsboro
on Saturday, July 5, 1919. When this plaque was made
c.1962, four decades after the event, the date likely was
obtained from a newspaper clipping in an old scrapook.
Consider the publishing schedule of a daily newspaper in
Nova Scotia at the time (for morning papers, not much
different from today) – start the press run in the late evening
to get papers into the overnight distribution system in time
for delivery to subscribers near and far to receive their copies
around breakfast time. The print run would be completed
well before dawn. That is, daily newspapers published in
Nova Scotia that Saturday would have been printed before
the crash happened. The plane crashed about dawn on
Saturday, July 5th. There were no Sunday newspapers.
The earliest newspaper report (in Nova Scotia) would
appear in the Monday papers. That old (in 1962)
clipping would have been dated Monday, July 7th.
No doubt that is the origin of this plaque mistake.

In 2005, the Parrsboro Town Council
decided to demolish this cairn, to make
way for planned improvements. The plaque
was salvaged and will be refurbished and
placed on public display in a new location.

The Air Mail 1919 plaque at the Parrsboro Public Works Department.

The Air Mail 1919 plaque is leaning against the door. 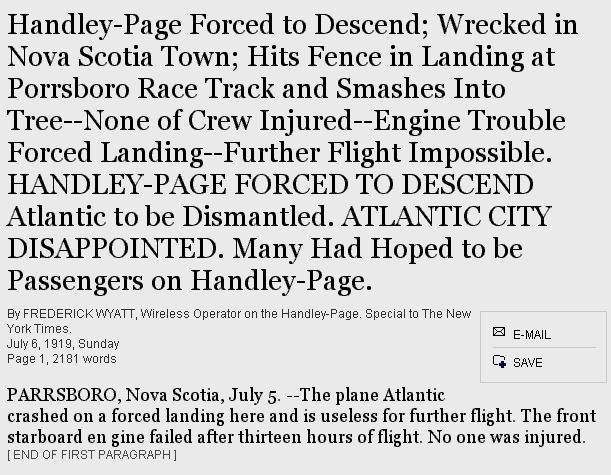 The navigator’s seat from the “Atlantic” is on display at
the Ottawa House By-The-Sea Museum, near Parrsboro

Fabric and Postcard from the Parrsboro Nova Scotia Handley Page
The postcard is dated 13October 1919:
“This is the picture of the airplane when she fell.”
http://www.kaisersbunker.com/rfc/rfc13.htm

The Handley Page
An excellent detailed description of the flight that ended at Parrsboro,
by Herbert M. Friedman and Ada Kera Friedman…
http://www.town.parrsboro.ns.ca/HandleyPageIntroduction.htm

Parrsboro Introduction
…Through a series of fateful events beginning with the emergency landing of
the Handley-Page airplane Atlantic in 1919, Parrsboro became a sister
community to Greenport, New York. In October of that year, the repaired
Atlantic carried the first international air mail from Canada to the United States
on a flight from Parrsboro to Greenport…
http://www.town.parrsboro.ns.ca/parrsboro%20introduction.htm

(1) Alcock and Brown Take the Atlantic …the ultimate prize was the still
unclaimed Daily Mail prize of £10,000 ($50,000) for the first nonstop crossing
of the Atlantic. One team had a clear head start: the Handley Page team
headed by Admiral Mark Kerr. The Handley Page V/1500 “Berlin Bomber”
was the largest aircraft built by the Allies during World War One, and was
equipped with four powerful Rolls-Royce engines…
http://www.esparacing.com/Aviation%20history/
daredevils/Atlantic%202.htm