(actually a peninsula, not an island)

Deadmans Island is the burial site of some 450 people from
around the world…prisoners of war…quarantine patients…
refugees…brought to Melville Island to be housed by
the Royal Navy…a considerable number died…
— Debate, Nova Scotia Legislature, 29 April 2004 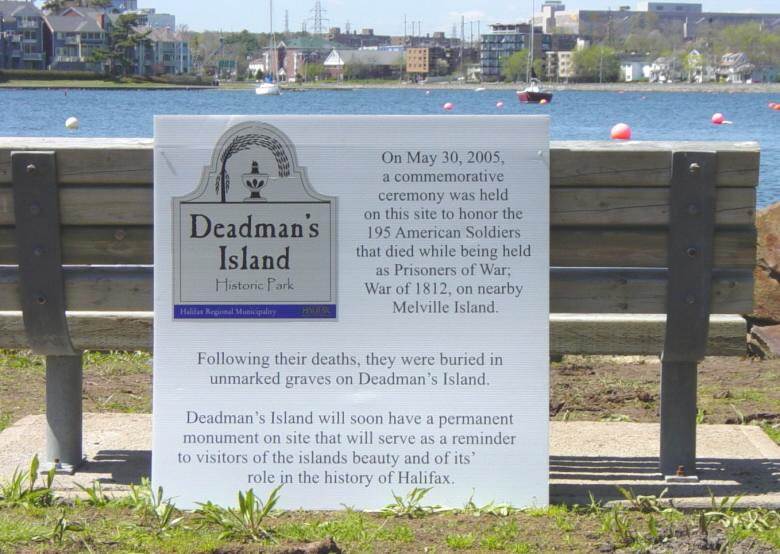 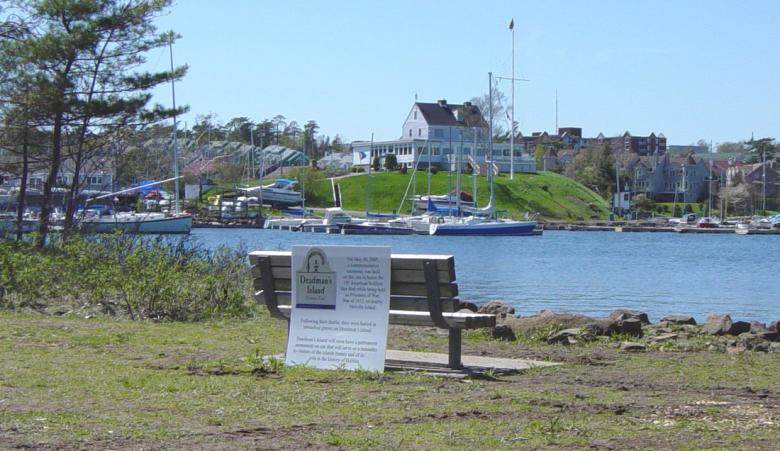 The view from Deadman’s Island looking toward Melville Island 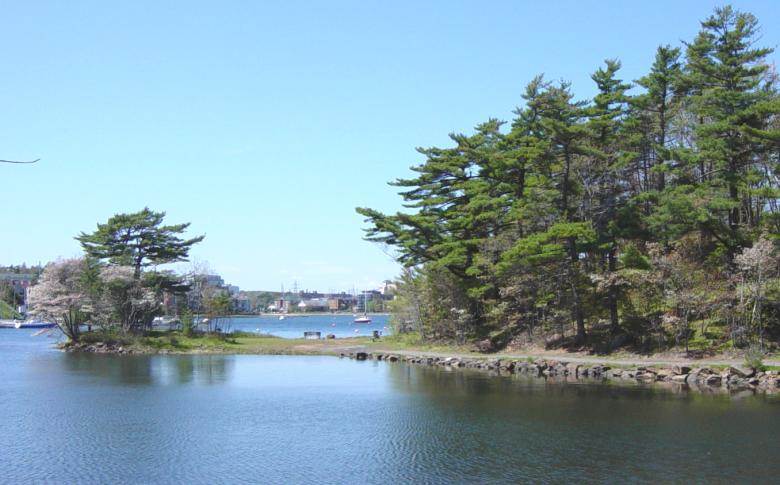 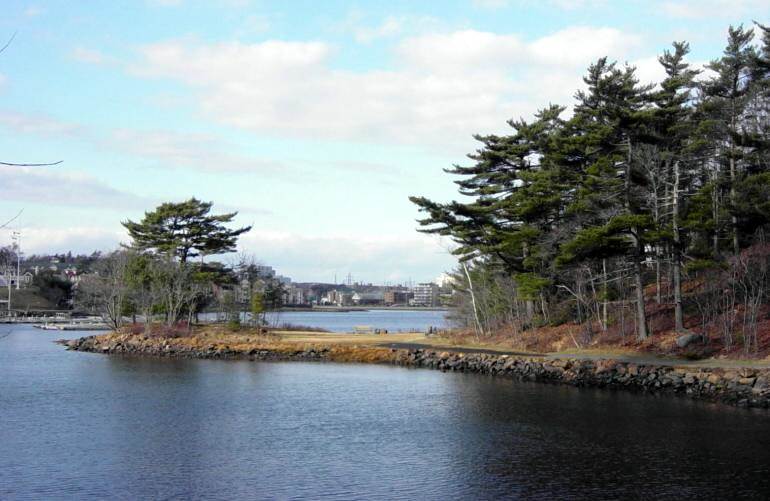 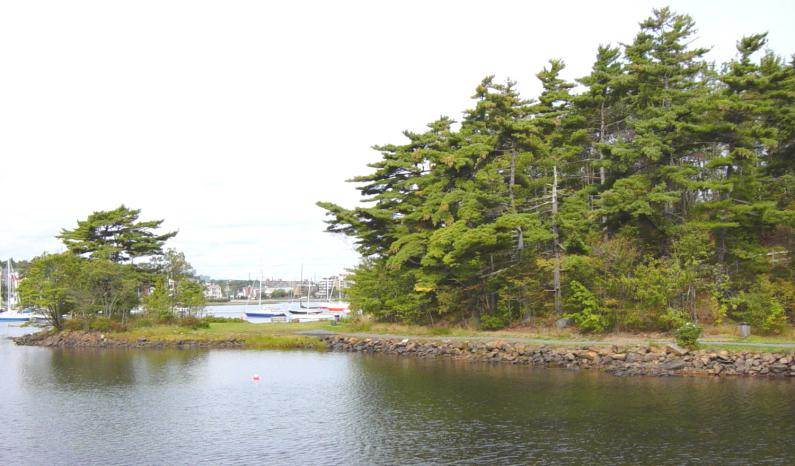 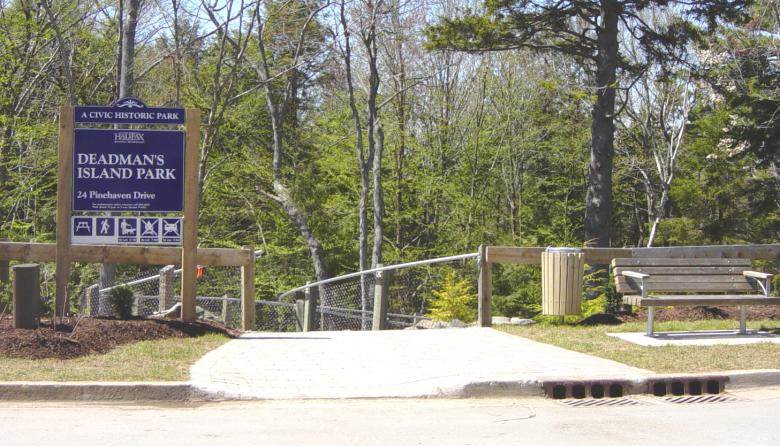 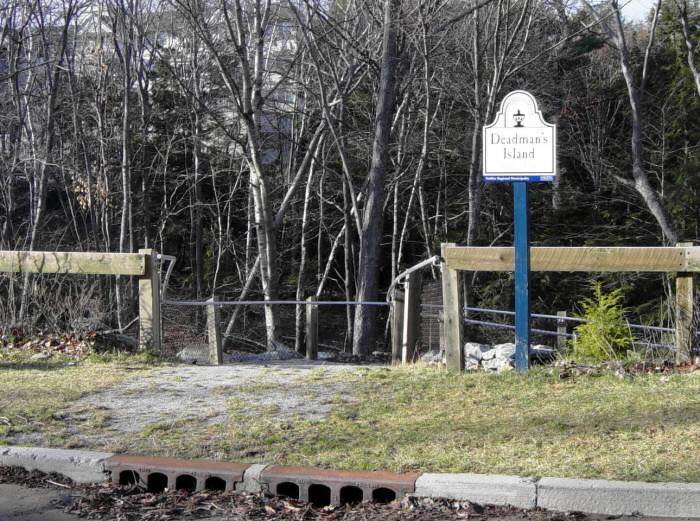 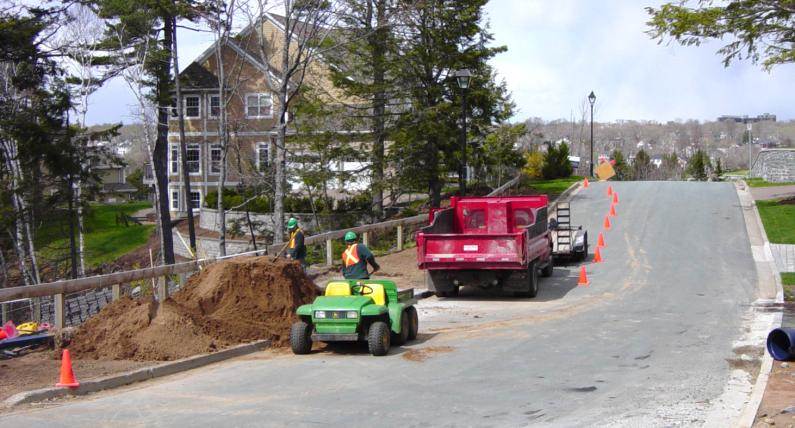 Improving the entrance to Deadman’s Island

Old war’s victims forgotten no longer:
Privateers of War of 1812 buried in Halifax
by Colin Nickerson, Boston Globe page A01 (front page), 12 May 2000
What started as a very local controversy over this land became a
history lesson that reverberated on both sides of the border…
US veterans groups and historical societies got wind of the island’s
past, and they were soon pressing Congress, Canada’s ambassador, and
the US State Department to protect Deadman’s Island. The Sons of the
American Revolution passed a resolution that “any desecration of
this sacred place would dishonor the memory of these patriots”…
http://www.usmm.org/halifax1812.html

HRM Notice to Editors:
Commemorative ceremony on Memorial Day
(Monday, May 30, 2005) for the close to 200 American War of 1812
prisoners who died while imprisoned at Halifax, Nova Scotia
http://www.halifax.ca/mediaroom/pressrelease/
pr2005/050526DeadmanIslandnoticetoeditors.html

Deadman’s Island S. S. G. S. News, 20 March 2000
South Shore Genealogical Society
The battle for an historical North West Arm site is finally over.
The Halifax Regional Municipality has reached an agreement to purchase
the peninsula known as Deadman’s Island. The Deadman’s story caught
the eye of an influential newspaper in the US because as many as
188 American prisoners of war likely were buried on the woody knoll
during the War of 1812. About 8,000 Amerrican soldiers captured during
the War of 1812 served time in the Melville Island military prison…
http://www.rootsweb.com/~nslssgs/newsmar0.htm

Graves on Development Site S. S. G. S. News, July 1998
South Shore Genealogical Society
After a preliminary survey of the site, an independent archaeologist
concluded it might contain 35 burial sites. “There was little doubt that
Deadman’s Island was used as a burying ground from the early-to-mid-19th
century,” he wrote in his report, which indicates that from 1804 to
at least 1856, Deadmans Island was a likely burial site for French and
American prisoners of war, refugee blacks from America, Irish and European
immigrants, and British military prisoners…
http://www.rootsweb.com/~nslssgs/newsjul8.htm

Melville Island by Iris Shea
originally published in the Lake Erie Ledger, October 1998
…Melville Island Prison became “home” to more than 8000 Americans
between 1812 and 1815, 1, 200 of whom served with the US Army Land Forces.
The prison became a place of death for more than 100 American prisoners.
A burial ground nearby, now known as Deadman’s Island, may contain the
remains of those Americans. No longer an island, nor is there evidence
it ever was an island, Deadman’s Island is actually a peninsula situated
on the shores of the North West Arm in Halifax, Nova Scotia, within
a stone’s throw of Melville Island…

Deadman’s Island by Mike Campbell
…The people of Halifax purchased the property in the year 2000 to protect
its special significance as a war grave and local historic site…Members of
the 164th Civil Engineering Squadron, Memphis, Tennessee Air National Guard
were working with Canadian colleagues on joint exercises in Nova Scotia when
they learned of the grave site. On June 23, 2000, they went to the site and
installed 188 small American POW/MIA flags…
http://www.mikecampbell.net/deadmansisland.htm

Deadman’s Island NovaNewsNet Digest for Feb. 10, 2000
Halifax Regional Council has agreed to buy Deadman’s Island on Halifax’s
Northwest Arm. Halifax Regional Municipality will pay $200,000 for the island,
which is the graveyard of historic Melville Island prison. There may be up
to 400 soldiers buried on the island, most of them American PoWs captured by
British Forces during the War of 1812. Deadman’s Island has been the subject
of several development proposals, including a plan in 1998 for a 60-unit
apartment building…
http://lists.spine.cx/archives/nnn/2000-February/000015.html

Deadman’s Island: Nova Scotia Legislature, 26 May 1998
Resolution No. 114: Whereas the proposed development
of Deadmans Island in the Northwest Arm has aroused opposition…
http://www.gov.ns.ca/legislature/hansard/
han57-1/h98may26.htm#[Page%20182]

Deadman’s Island: Nova Scotia Legislature, 29 April 2004
…We asked the question, why is it called Deadmans Island, did the research,
and although the City of Halifax felt that it was not worth the designation of
heritage and the province by extension because of somewhat weak municipal
heritage laws, although that was not worthy of designation as heritage, at the
moment the American Foreign Legion is preparing to erect a monument there.
The French Government is interested and the Spanish Government is
interested, as well, because Deadmans Island is the burial site of some 450
– I won’t break it down for you – people from around the world, because
people from around the world at different times, either as prisoners, as
quarantine patients, or as refugees, were brought to Melville Island to be
housed by the Royal Navy, either as prisoners or receiving sanctuary and of
those people, a good number died. Those people were buried in unmarked
graves on Deadman’s Island, a place not worthy of heritage designation.
Luckily, that much at least is now being corrected, but it is as a result of the
pressure of governments from outside this province…
http://www.gov.ns.ca/legislature/hansard/
han59-1/house_04apr29.htm#H[Page%202886]

War of 1812: The War on the Waters
…In only one case, that of HMS Shannon and USS Chesapeake did the
British prevail, and the victor brought the unfortunate Chesapeake
to Halifax harbour…
http://www.collectionscanada.gc.ca/military/025002-2031-e.html

American Vessels Captured by the British American Revolution and War of 1812
Records of the Vice-Admiralty Court at Halifax, Nova Scotia
http://web.archive.orghttp://www.maritime-scotland.com/halifax_prizes.html

The Standing Interrogatories
The 32 questions listed here are the Standing Interrogatories which were
used in the War of 1812. They are the questions which were put to the
captured crew of a prize vessel and give a good indication of the range of
material which can be found in Prize court records. To be administered
on behalf of Our Sovereign Lord George theThird… To all Commanders,
Masters, Officers, mariners, and other Persons found on board any Ships
and Vessels, which may have been, or shall be seized or taken as Prize by
any of His Majesty’s Ships or Vessels… examined as Witnesses in
preparatory during the present hostilities with the United States of
America. Let each witness be interrogated to every of the following
Questions; and their answers to each Interrogatory written down…
http://www.1812privateers.org/Privateers/interrog.html

Overview: American Privateer, Prince of Neufchatel
…The American frigates were bigger, faster, tougher, and more lethal
than their British counterparts and could defeat them in one-on-one conflict.
However, British numbers were far superior, and a British blockade eventually
tied the frigates up in harbor…
http://www.jmu.edu/madison/center/main_pages/madison_archives/
life/war1812/privateer/overview.htm

Events of the War of 1812: A Chronology compiled by Robert Henderson
http://www.warof1812.ca/1812events.htm

Chapter 6: The War of 1812 American Military History, Army Historical Series
Office of the Chief of Military History, United States Army
To Great Britain the War of 1812 was simply a burdensome adjunct of its
greater struggle against Napoleonic France. To the Canadians it was
clearly a case of naked American aggression. But to the Americans it
was neither simple nor clear. The United States entered the war with
confused objectives and divided loyalties…
http://www.army.mil/cmh-pg/books/amh/AMH-06.htm

A Provisional Agreement, for the Exchange of Naval Prisoners of War
November 28, 1812
by the Avalon Project at the Yale Law School
The Government of the United States of America having sent to Halifax
JOHN MITCHELL, Esquire, late Consul of the United States of America at
St. Jago de Cuba, to act as Agent on the Part of the United States of
America, for the purpose of adjusting with the Admiral Commanding at
Halifax and the West-Indies the Exchange of Prisoners taken at sea;
And His Excellency the Right Honourable Sir JOHN BORLASE WARREN,
a Privy Counsellor in the United Kingdom of Great-Britain and Ireland,
Knight of the Most Honourable Order of the Bath, Knight of the Crescent,
Admiral of the Blue, and Commander in Chief of all His Majesty’s Ships
of War stationed on the coasts of North America and the West-Indies,
having appointed RICHARD JOHN UNIACKE, Esquire, a Member of the
Honourable His Majesty’s Council, and the Attorney and Advocate General
of His Majesty for the Province of Nova-Scotia, and WILLIAM MILLER,
Esquire, Lieutenant in the Royal Navy and Agent for Prisoners of War
at Halifax, as Agents to treat with the said JOHN MITCHELL on the part
of His Majesty’s Government for the Exchange of such of His Majesty’s
Subjects as have been or may hereafter be captured at sea, by the public
or private Ships of War belonging to the United States of America, for
the American Prisoners which have been or hereafter may be taken at sea
by His Majesty’s Ships of War and Privateers; and the said Agents having
met and discussed the Matters to them referred, have agreed upon the
following Articles…
http://www.yale.edu/lawweb/avalon/diplomacy/britian/cartpre.htm

Cartel for the Exchange of Prisoners of War Between Great Britain and
the United States of America May 12, 1813
by the Avalon Project at the Yale Law School
The Provisional agreement for the exchange of naval prisoners of war,
made and concluded at Halifax in the province of Nova Scotia on the
28th day of November 1812 between the Honourable Richard John Uniacke
His Britannic Majestys attorney and advocate General for the province
of Nova Scotia and William Miller Esquire Lieutenant in the Royal navy
and agent for Prisoners of War at Halifax; and John Mitchell Esquire
late consul of the united states at St Jago de Cuba, american agent
for Prisoners of war at Halifax, having been transmitted to the
Department of state of the United States for approval and John Mason
Esquire Commissary General for Prisoners for the United States having
been duely authorised to meet Thomas Barclay Esquire his Britanic
Majestys agent for Prisoners of war and for carrying on an exchange
of Prisoners for the purpose of considering and revising the said
provisional agreement and the articles of the said agreement having
been by them considered and discussed-it has been agreed by the said
Thomas Barclay and John Mason subject to the ratification of both
their governments that the said provisional agreement shall be so
altered and revised as to stand expressed in the following words…
http://www.yale.edu/lawweb/avalon/diplomacy/britian/cart1812.htm

Decision of the Commissioners under Article 4 of the Treaty of Ghent,
signed at New York November 24, 1817
by the Avalon Project at the Yale Law School
Commissioners, appointed by virtue of the fourth Article of the
Treaty of Peace and Amity between His Britannic Majesty and The
United States of America concluded at Ghent on the twenty fourth
day of december One Thousand eight hundred and fourteen to decide
to which of the two Contracting parties to the said Treaty the
several Islands in the Bay of Passamaquoddy which is part of the
Bay of Fundy and the Island of Grand Menan in the said Bay of Fundy
do respectively belong in conformity with the true intent of the
second Article of the Treaty of Peace of One Thousand seven hundred
and eighty three between His said Britannic Majesty and the
aforesaid United States of America…
http://www.yale.edu/lawweb/avalon/diplomacy/britian/ghentcom.htm

War of 1812
Records Relating to American Prisoners of War

Records Relating to American Prisoners of War, (1812-1815)
eleven microfilm reels
Special Collections Division, University of Missouri, Columbia, Missouri —
The records relating to Americans taken prisoner by British forces
during the War of 1812 form a portion of the Admiralty records in the
Public Records Office. The largest group of material is Medical Department:
Registers. This consists of ledgers of information on American
prisoners-of-war for prison ships and depots. The records were generated
in the process of receiving and housing prisoners and monitoring their
passage through the prison system. The ledgers recorded prisoners by
number, name, place of birth, age, and physical attributes. They also
recorded how the prisoners were taken, time and place of capture,
ship from which prisoners were taken, supplies issued, and disposition
of the prisoners. American prisoners were detained in
England (8 locations), Canada (3 locations), Bermuda, New Providence,
Barbadoes, Jamaica, Gibraltar, Malta, and Cape of Good Hope.
http://system.missouri.edu/spec/britrecmf.htm