The Planters monument with a stake marking the new location for the Iron Cross.

The new Iron Cross location is between the monument and the historic dead tree. The Iron Cross being installed at its new location. 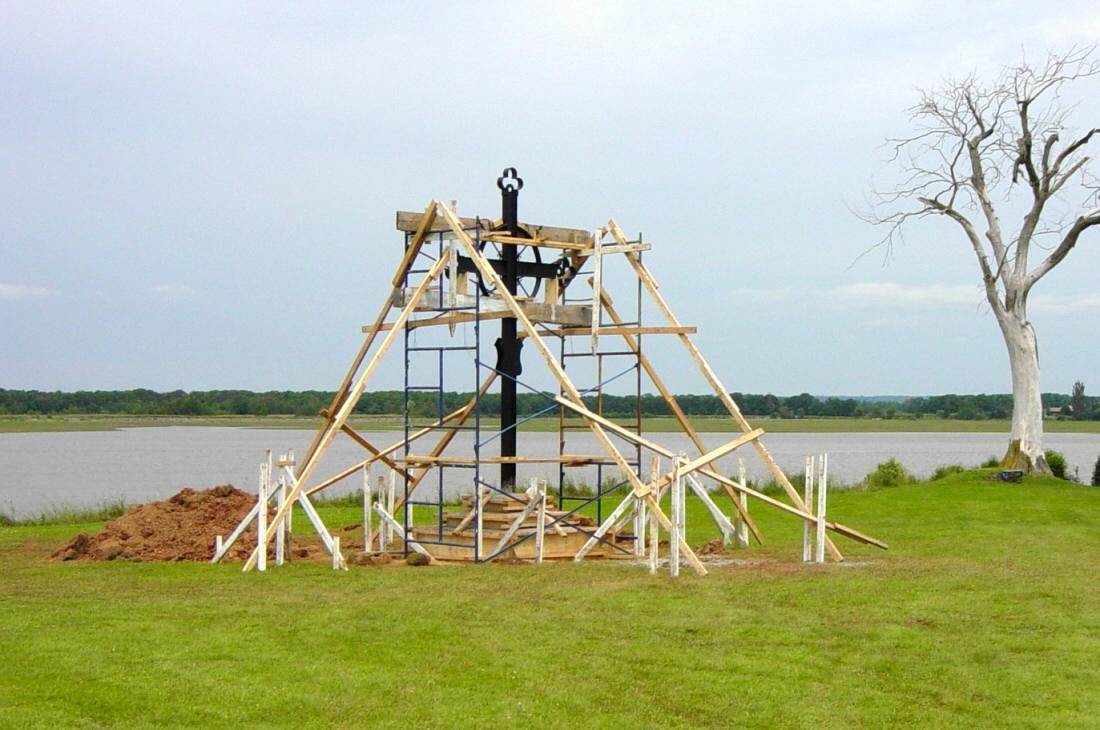 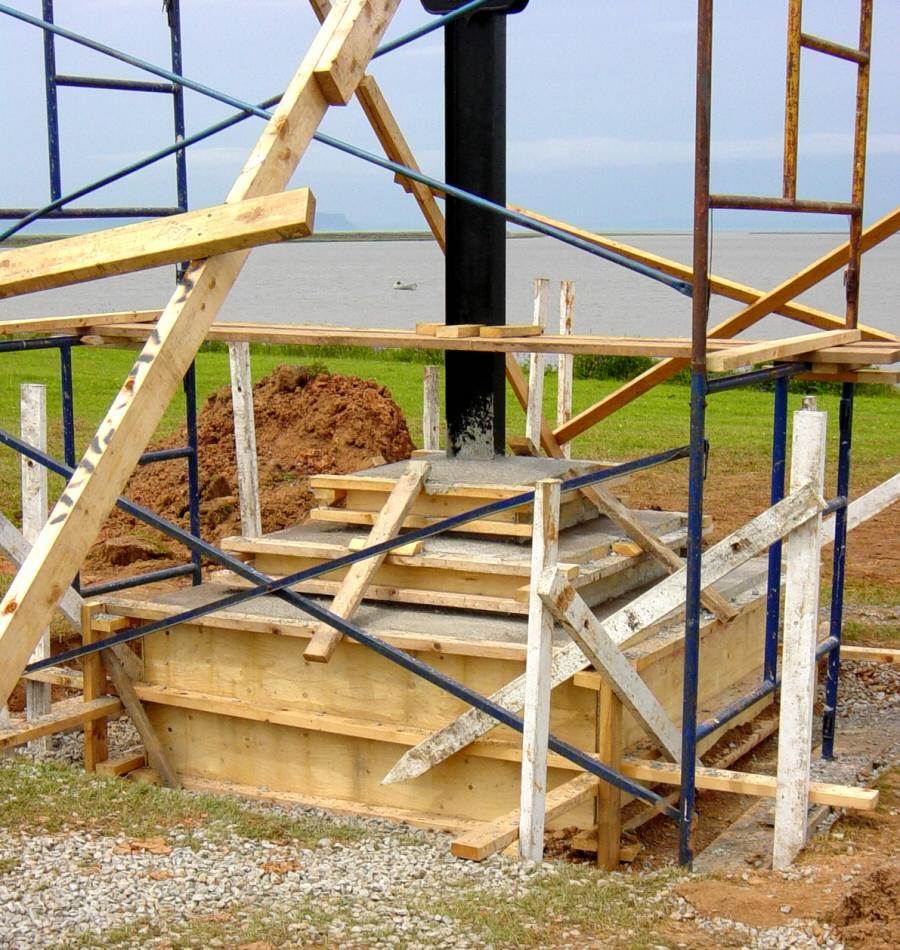 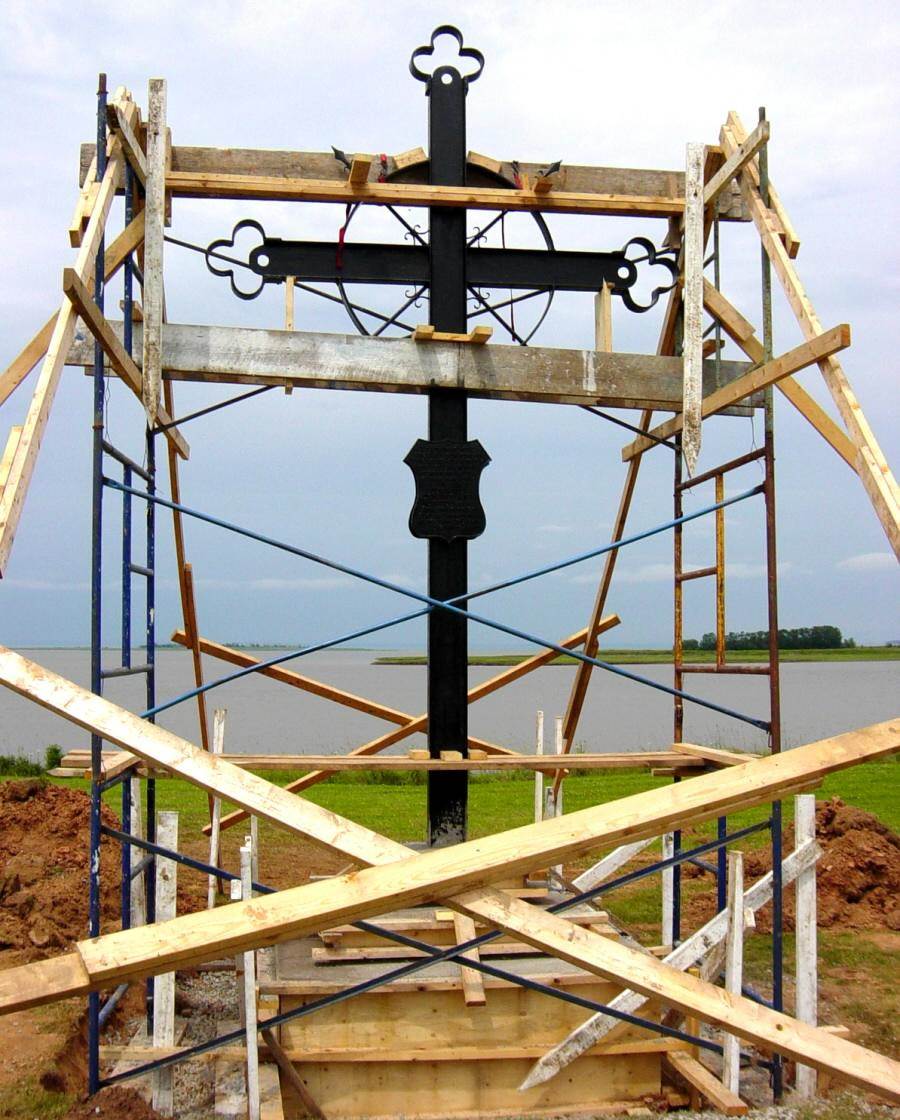 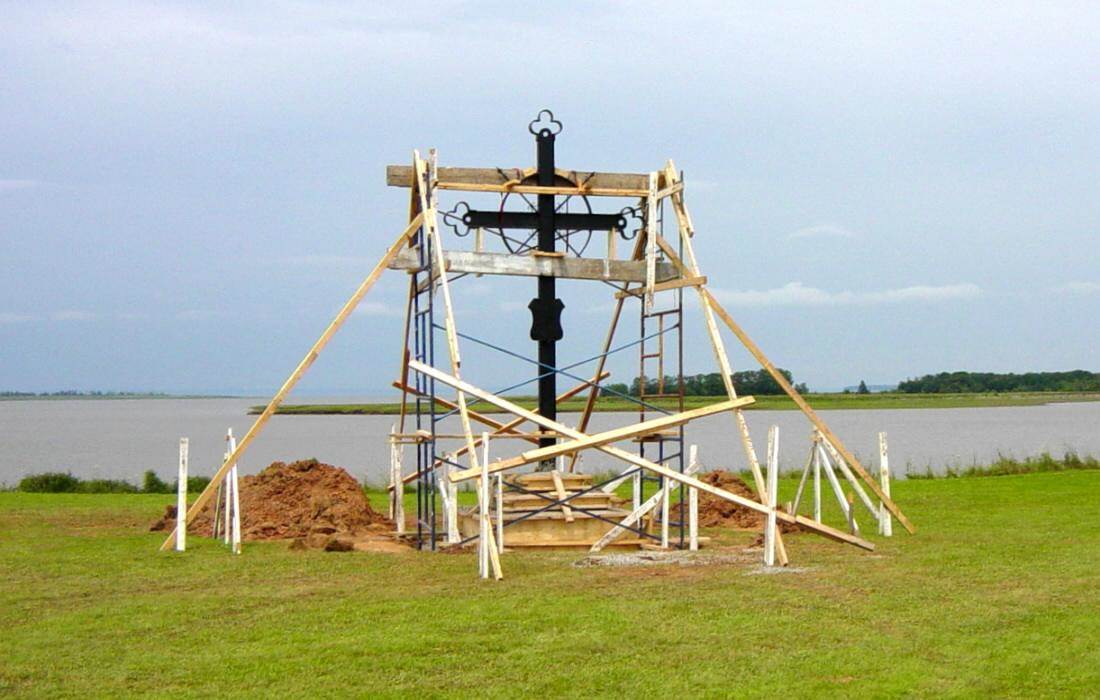 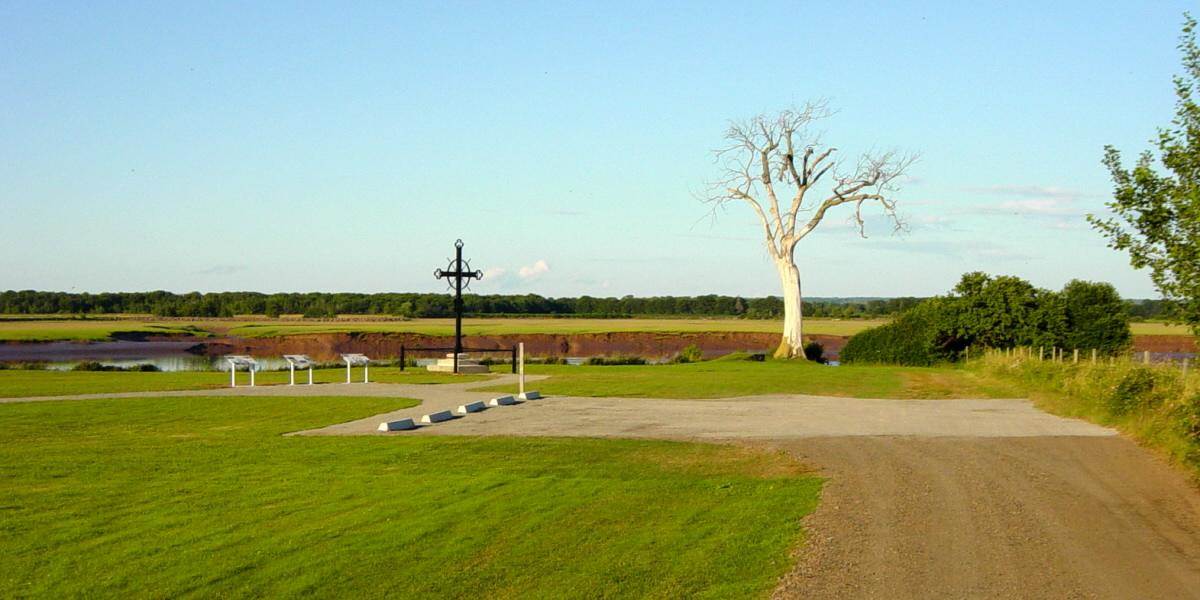 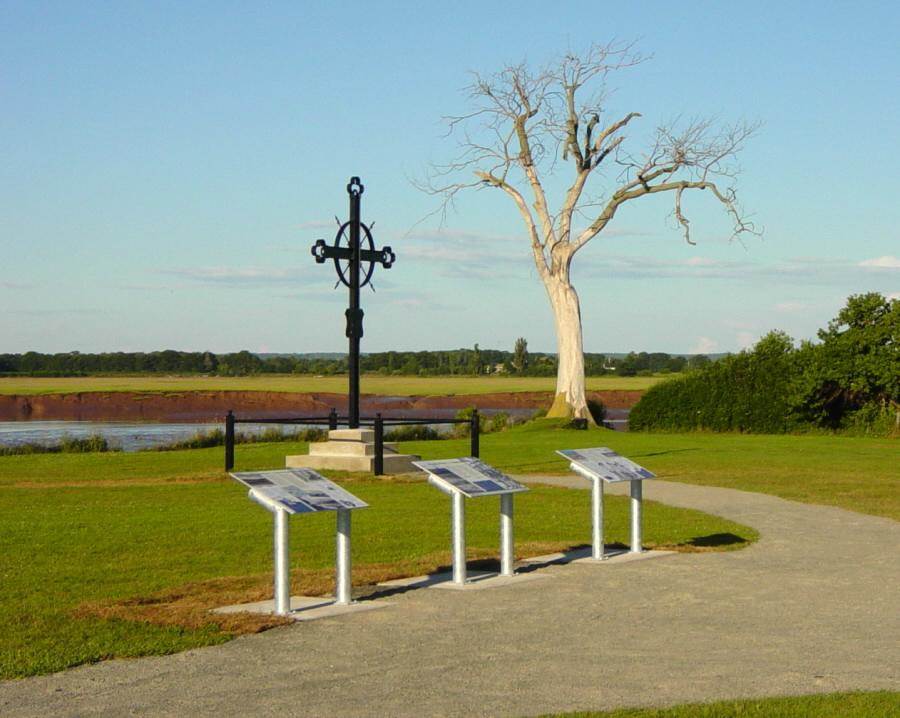 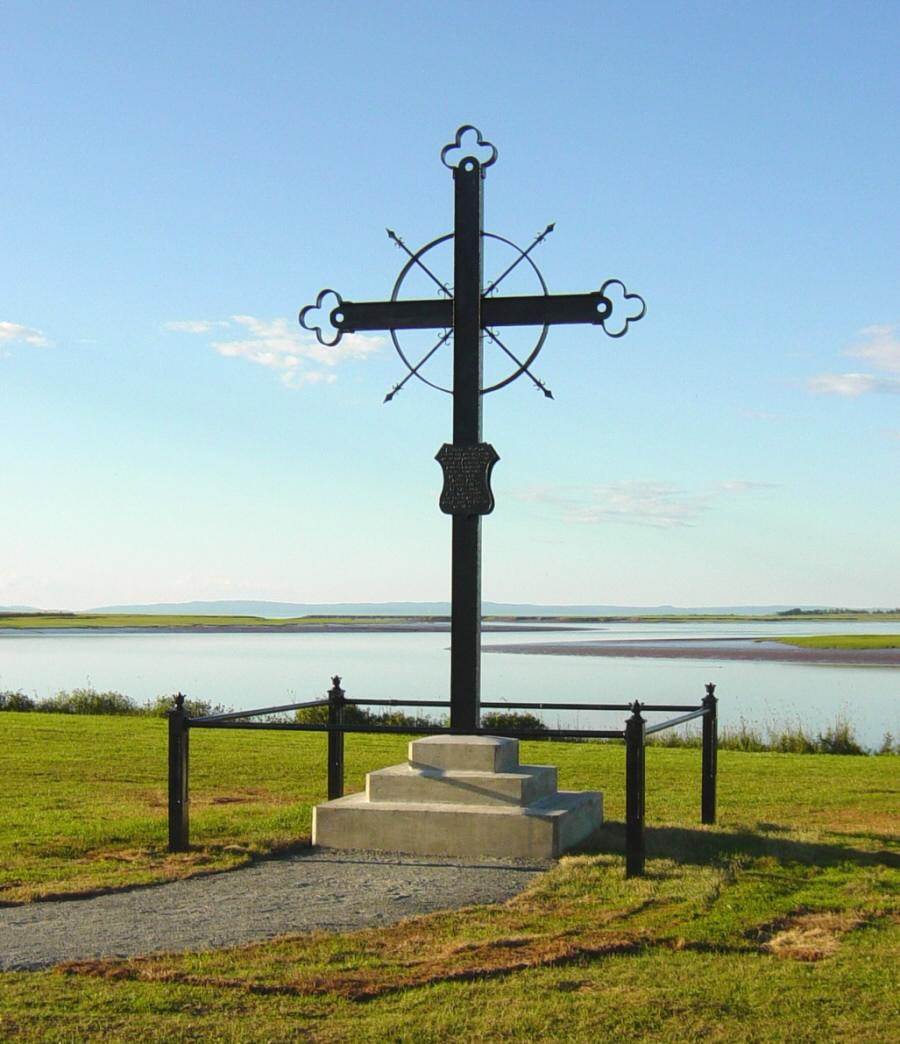 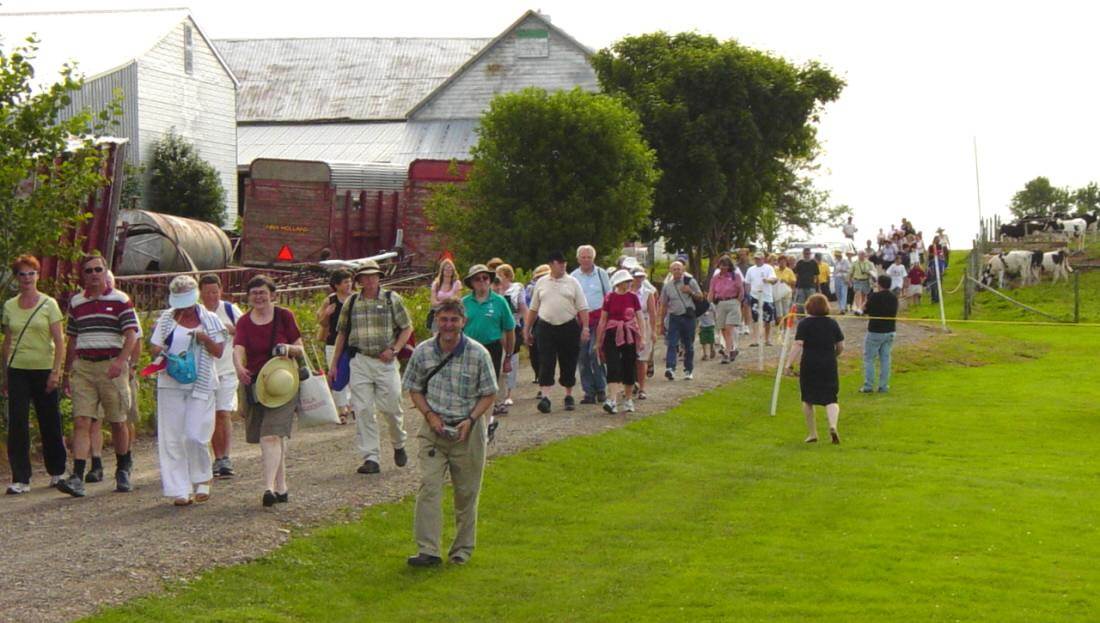 Above: Photographs taken at new location

Installed at new location in July 2005

Below: Photographs taken at old location 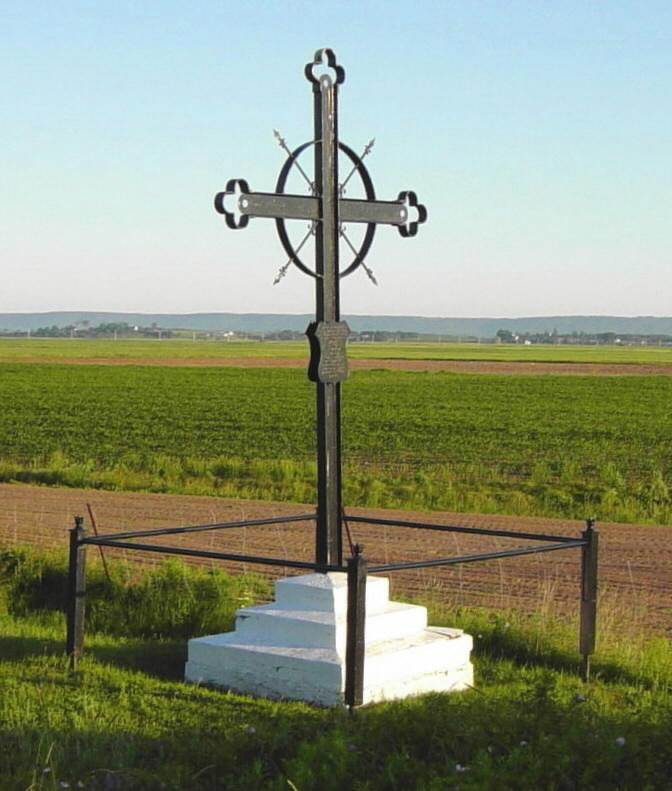 The Iron Cross, as it appeared in 2003 in its original location. 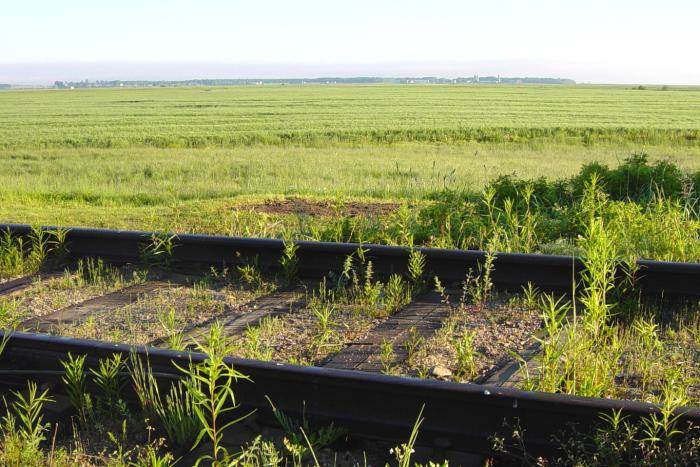 The Iron Cross, that stood near the railway for 81 years, is gone. 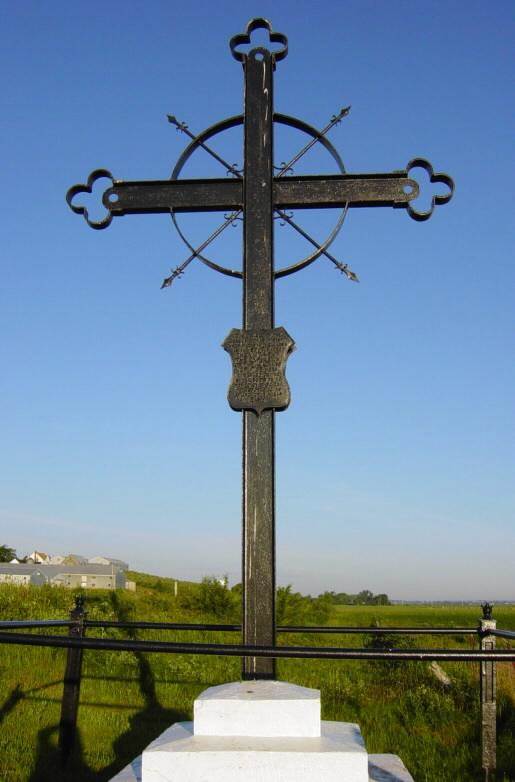 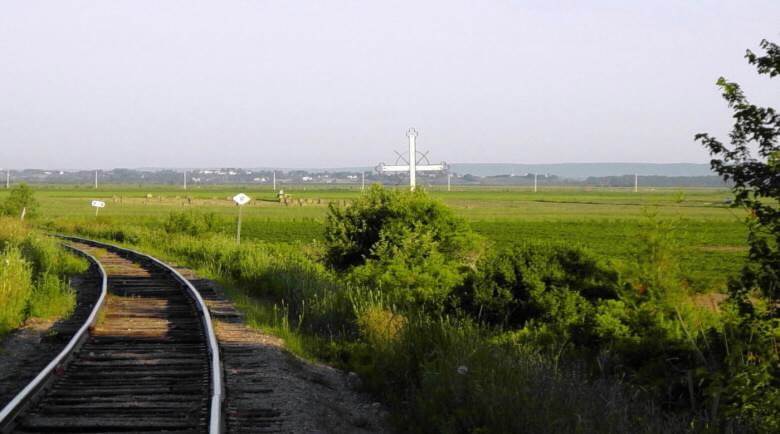 The Iron Cross is painted black all over. At 6:28am on July 7th, light from the
rising sun glints from the fresh paint to give the appearance that it is white. 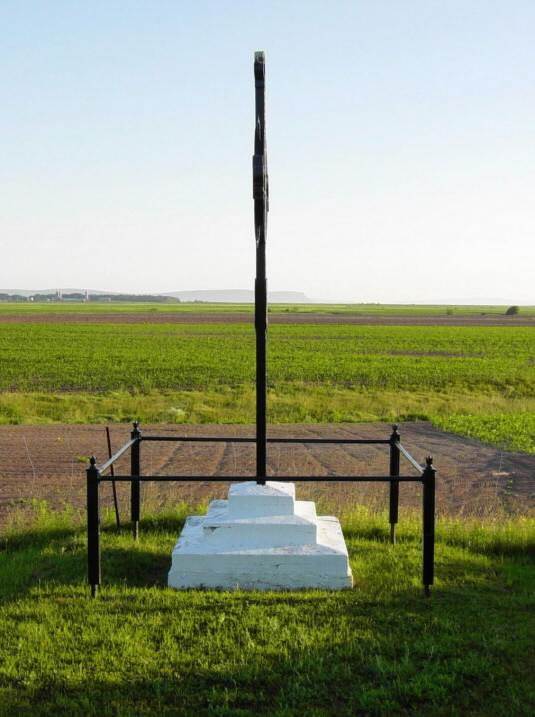 Looking northward with Cape Blomindon in the background 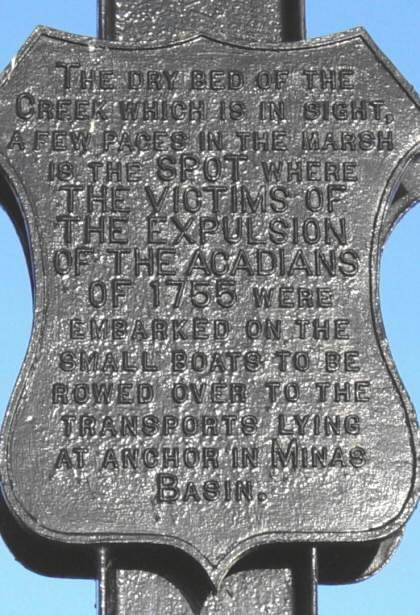 Plaque on the Iron Cross monument Looking eastward in the early evening, along the
old main line track of the Dominion Atlantic Railway,
twenty minutes after the freight train had passed Roads are shown as they were in 1956. Except for Highway 101, the
layout of the roads in 2006 has not changed much from that shown here.

Note: In the CBC article, there is a reference to “The rusty cross…”. Thisisfiction. The Iron Cross, in its original location, was very well maintained, and had recently been freshly painted where it stood. There was no “rust” to be seen (seephotographs above).


Deportation Cross St. Martinville, Louisiana
…A series of commemorative cross monuments will be designed and unveiled
in Atlantic Canada, the United States, France, England, the Caribbean
and Quebec, to mark those sites where Acadians landed after the Deportation…
http://www.acadianmemorial.org/english/deportationcross.html

The Acadian memorial in St. Martinville has been honoured
by Parks Canada as the first of several international sites for
a replica of the Grand Pre Deportation Cross (pictured).
The original cross is in Grand Pre, Nova Scotia, and marks
the site of the embarkation of the Acadians in 1755.
A series of commemorative cross monuments will be
designed and unveiled in Canada, the United States,
France, England, the Caribbean, and Quebec. These
sites are where the Acadians landed after the deportation.
— Cajun Life and Times, issue 33
http://www.cajunlifeandtimes.com/lagniappe_issue33.htm

Replica Revives History: St. Martinville Cross Honors Grand Pre Exile
by Jim Bradshaw, The Daily Advertiser, Lafayette, Louisiana, 10 June 2003
…(The Grand Pre) cross memorializes events of early September 1755,
when transport ships began to assemble off of a shallow, marshy spit of land
near Grand Pre, Nova Scotia. They were there to receive longboats laden with
hundreds of Acadians who had been forcibly evicted from their ancestral lands
and were to be scattered around the world as penniless exiles. Nearly 170 years
later, in 1924, a large iron cross was dedicated at that embarkation point
about a mile from the Grand Pre church. Now, nearly 250 years later, an exact
duplicate stands next to Bayou Teche, where many of those exiled families
eventually found new homes. The cross in St. Martinville is the first of ten…
http://www.acadiananow.com/news/html/
CE5149E5-CA67-42B7-B1F1-CBB846332DD9.shtml 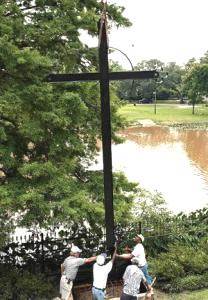 St. Martinville Honored as Memorial Cross Site
Editorial in The Advertiser, Lafayette, Louisiana, 15 June 2003
…In 1924, a large iron cross was dedicated at a point near Grand Pre,
where British ships carried the Acadians away from their land and in
many cases from family members. The cross blessed by Bishop Jarrell
today is a replica of that one. St. Martinville is the appropriate
place for the first of ten such replicas to be placed at points where
Acadians ended their tragic journey…
http://www.acadiananow.com/ouropinion/html/
4BC5958C-DCD3-4D7C-9C17-4722AB142C8B.shtml

Acadians Memorialize Ancestors’ Tribulations
The Advocate (daily newspaper), Baton Rouge, Louisiana, 16 June 2003
…More than two centuries later, a simple iron cross stands beside
St. Charles Catholic Church in Grand Pre, Nova Scotia, as a memorial to
Le Grande Derangement, the 1755 deportation of the Acadians. Last week,
a replica of that cross was erected in the garden of the Acadian Memorial
in St. Martinville, Louisiana. On Sunday [June 15th, 2003] it was blessed
by the bishop of Lafayette and dedicated during a solemn ceremony in the
church built by the first Acadians who arrived here. St. Martinville’s cross is
the first of 37 planned for sites around the world where those deported
Acadians were dropped in 1755: England, France, the East Coast of America
and the islands in the Caribbean, said Christy Dugas Maraist, president of
the Acadian Memorial Foundation…
http://www.2theadvocate.com/stories/061603/new_acadian001.shtml 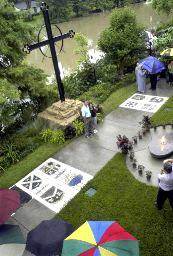 These links were accessed and found to be valid on 24 July 2009.

These links were accessed and found to be valid on 24 July 2009.